See if your vehicle is affected by our proposals

The Mayor of London has decided to expand the ULEZ to the GLA boundary.

The Mayor received a report from us detailing the findings of the consultation, which formed part of his decision making process.

The consultation sought views on the ULEZ expansion, possible future road charging schemes, changing the way Auto-pay works, increasing the penalty charge notices for ULEZ and the Congestion Charge as well as, an amendment to the Mayor’s Transport Strategy.

As a result of the consultation and the MayoralContinue reading

See if your vehicle is affected by our proposals

The Mayor of London has decided to expand the ULEZ to the GLA boundary.

The Mayor received a report from us detailing the findings of the consultation, which formed part of his decision making process.

The consultation sought views on the ULEZ expansion, possible future road charging schemes, changing the way Auto-pay works, increasing the penalty charge notices for ULEZ and the Congestion Charge as well as, an amendment to the Mayor’s Transport Strategy.

As a result of the consultation and the Mayoral decision to expand the ULEZ we have also decided to;

To support the ULEZ expansion, the Mayor has announced that he is funding a £110m scrappage scheme for low income and disabled Londoners, charities micro businesses and sole traders to help take the most polluting vehicles off London’s roads. The scheme will open on 30 January 2023, but the website has already been updated with some details on what the scheme will look like and who will be eligible can apply.

Further consideration has also been given for what mitigations is needed to support disabled Londoners, recognising that outer London has higher levels of car reliance and fewer sustainable alternatives for some journeys. Recipients of certain benefits will be eligible for the extension of the disabled benefits grace period from 30 January 2023 until 24 October 2027.

The Proposal 24.1 is available here.

A Post-adoption Statement (PAS) was also prepared in accordance with the Environmental Assessment of Plans and Programmes Regulations 2004 (the SEA Regulations).  Copies of the MTS Revision and the PAS, as well as the Integrated Impact Assessment of the proposed revision and the Habitats Regulation Assessment, may be inspected free of charge during office hours at TfL’s main office: Palestra, 197 Blackfriars Road, London SE1 8NJ; and at City Hall, Kamal Chunchie Way, London E16 1ZE.

The consultation was analysed by a third party and they presented two reports to us. One on the MTS revision and the other on the other elements we consulted on.

Following on from these reports, we produced our responses to the main issued raised in both reports and these found in Chapter 5 of the Report to the Mayor documents for the MTS and ULEZ report

Our consultation on proposals to extend the Ultra Low Emission Zone (ULEZ) has now closed. Thank you to everyone who responded. We are now considering the feedback we received and aim to publish our consultation report and next steps later in the year.

We are consulting on proposals to expand the Ultra Low Emission Zone (ULEZ) London-wide on 29 August 2023. We want to hear your views on our proposals. These proposals are part of the commitment by the Mayor of London and TfL to help improve air quality and public health, tackle the climate emergency and reduce traffic congestion across Greater London.

Please read about our proposals in the consultation brochure: 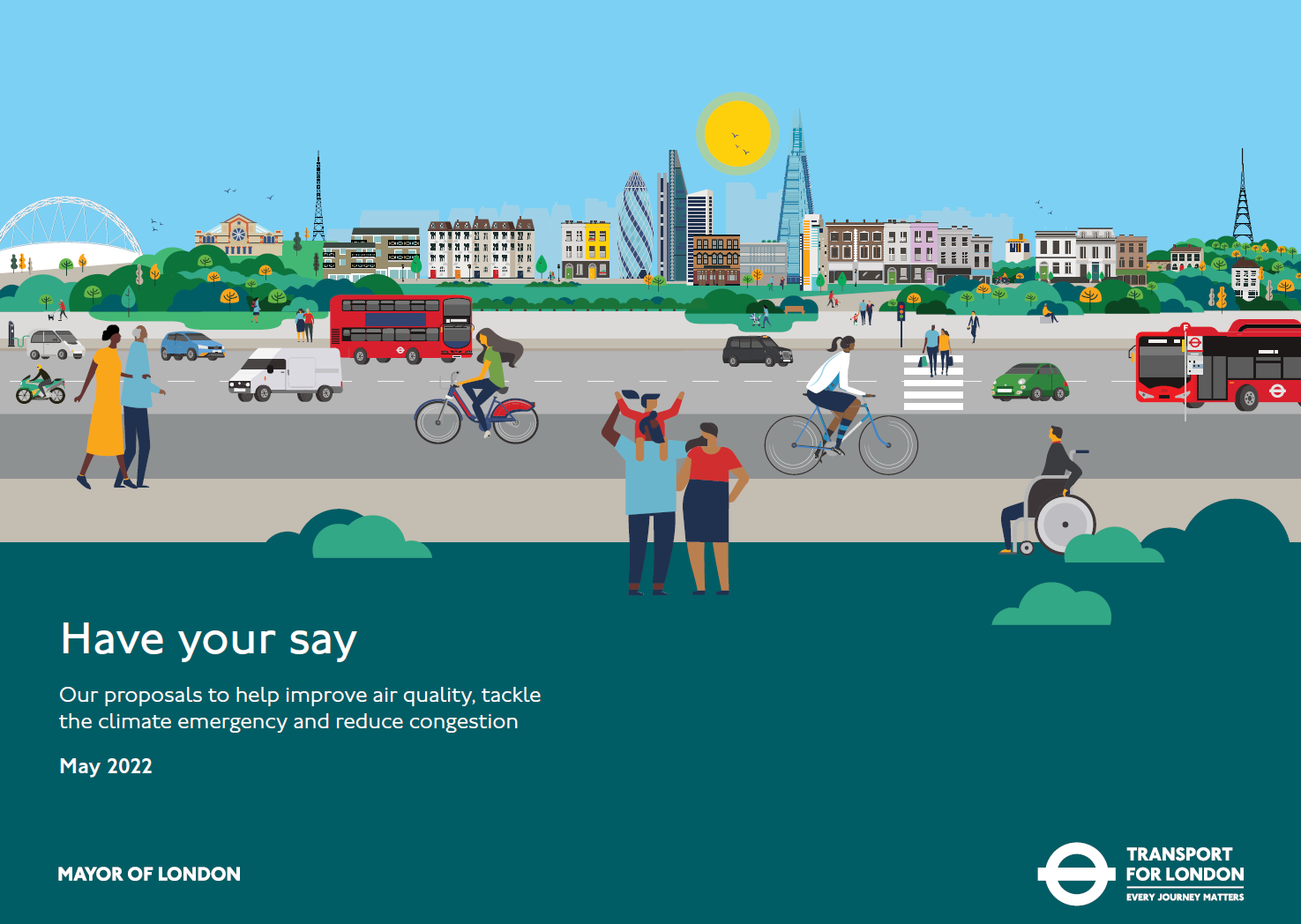 Or you can watch this video summarising our proposals:

The ULEZ currently covers the area inside the North and South Circular roads. It sets minimum ULEZ emissions standards for “light” vehicles, such as cars, motorcycles and vans; drivers of vehicles that don’t meet them must pay a daily charge to drive within the Zone unless an exemption or discount applies. "Heavy" vehicles, such as buses, coaches and lorries, are already subject to these standards London-wide.

We are also proposing to change the penalty charge level for non-payment of the daily ULEZ and Congestion Charge from £160 to £180, remove the £10 per vehicle annual Auto Pay registration fee for the Congestion Charge, ULEZ and Low Emission Zone, and make changes to the Mayor’s Transport Strategy.

See our consultation brochure for more details. We also have an easy-read version of the proposals and survey available.

These are our proposals for the London-wide expansion of the ULEZ from 29 August 2023. The new boundary would cover almost all (96 per cent) of Greater London, up to the existing Low Emission Zone (LEZ) boundary. You can view our overview map or view an interactive map of the proposed new boundary.

The boundary of the expanded Zone is designed to make sure there are opportunities for vehicles to turn around should they not wish to enter the Zone.

We are also seeking views on how we shape the future of road user charging.

You can read a summary of our proposals in our consultation brochure and in more detail in Our proposals to help improve air quality, tackle the climate emergency, and reduce congestion by expanding the ULEZ London-wide and other measures consultation document. 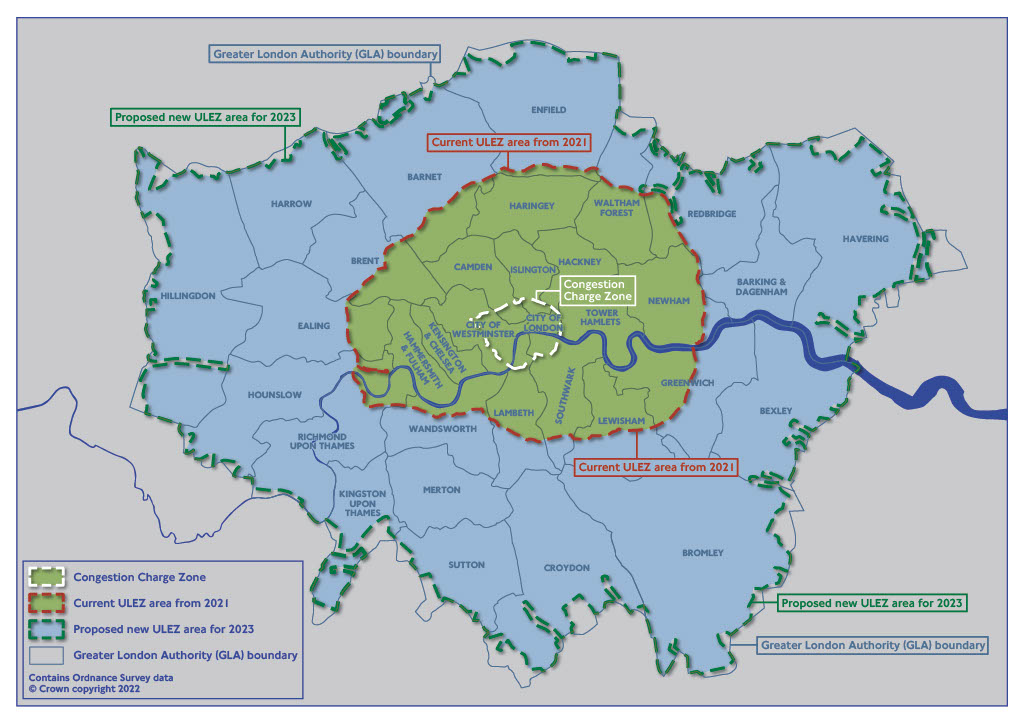 Details of the proposals:

The Mayor is also proposing to revise his Transport Strategy (MTS) to set out the triple challenges of toxic air pollution, the climate emergency and congestion that London is facing, notwithstanding achievements in delivering existing MTS policies and proposals. The new proposal would reinforce the importance of seeking to address these challenges and the role of road user charging including a London-wide ULEZ in doing so.

We want to hear your views on how we can shape the future of road user charging as part of the commitment by the Mayor of London and TfL to improve air quality, tackle the climate emergency and reduce congestion across Greater London.

To have your say on our proposals, you can take part in our consultation survey. Details on other ways you can submit your views are provided below.

We are proposing to expand the ULEZ London-wide from 29 August in 2023. The ULEZ would be expanded to outer London to cover the same area as the existing Low Emission Zone (LEZ). We have summarised our proposals in our consultation brochure.

Since its implementation in 2019 and the subsequent expansion to inner London (up to the North and South circular roads) in October 2021, the ULEZ has already helped to improve air quality in central and inner London. Most vehicles in the existing zone (92 per cent) are already ULEZ compliant. However, we need to do much more to protect the health and wellbeing of Londoners, especially those in outer London boroughs, where poor air quality is attributable to a greater number of deaths than in inner London (albeit levels of air pollution are lower in outer London).

We are proposing to expand the ULEZ London-wide from August 2023 as part of our plans to tackle toxic air pollution, as well as helping to address the climate emergency and traffic congestion.

We would like your views on the proposals to expand the ULEZ London-wide from 29 August 2023, removal of the annual Auto Pay vehicle registration fee, increases in the penalty charge notice levels for non-payment of the daily ULEZ charge and the Congestion Charge, changes to the Mayor’s Transport Strategy (MTS) and your thoughts on how we shape the future of road user charging.

We also welcome your views on minor operational changes we propose making to the Congestion Charge and ULEZ schemes.

Please note – If you have an existing account registered with TfL for other services, such as paying ULEZ or Congestion Charge or Oyster card management, you will still have to register a Have your say account to complete the online survey

If you prefer not to complete the survey, then please submit your response to us in writing to cleanairyourview@tfl.gov.uk or FREEPOST TFL HAVE YOUR SAY (no stamp required). You can also phone this number 0343 222 1155 to leave your feedback or ask a question about our proposals.

We also want this consultation to be accessible to everyone:

If you know of any local community groups or meetings that you would like to invite a member of the project team to, please email us at cleanairyourview@tfl.gov.uk or call 0343 222 1155 with details of the meeting and we will call you back.

Information to help you respond

Have a look at our Frequently Asked Questions. These will be updated throughout the consultation as questions come in.

If you would like to view the new proposed ULEZ boundary, there is an overview map in the ‘Key Documents’ section of this page. You can also use this interactive map to see the roads and areas covered by the proposed new ULEZ area.

If you would like more detailed information, there is also: